An event every week that begins at 2:00 pm on Friday, repeating until 27th September 2019 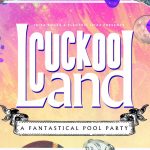 Featuring a line up of the best in house, tech house and disco the sun-drenched series will kick off on the 31st May and run until the 27th September 2019.

Already confirmed is Sonny Fodera who will be headlining the opening 10 weeks until the 2nd August and we expect more act announcements over the coming weeks.

Having made serious waves over the last two summers the poolside wonderland has become not only one of the go to day parties on the island but a place for true lovers of dance to come together under the Balearic sun.

So join Ibiza Rocks above the clouds with a journey into the fantastical world of Cuckoo Land for day sessions filled with music and madness.

The season line ups are below and tickets are on sale now.