An event every week that begins at 2:00 pm on Thursday, repeating until 29th August 2019 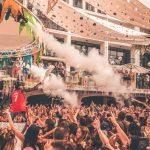 Rudimental Ibiza Rocks 2019 will be a 9 week residency this summer for their second year of pool parties from the 4th of July until the 29th August.

Ibiza has always been a special place for Rudimental. From their first holiday to the island in 2011 (staying as guests at Ibiza Rocks Hotel!) to now where a lot has happened in between.

Sold-out tours, headline performances worldwide, starting their own festival and establishing their own record label, Major Toms they have truly become one of the biggest dance acts in the world.

With their history of working with some of the world’s biggest music artists, the collaboration kings have hand-picked the best musical talent to curate their ‘friends’ for the 9-week July and August residency.